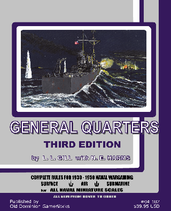 Naval games feature less frequently, but club members have fleets from a wide range of periods and scales.


General Quarters used for WWI or WWII, a good simple game, although it struggles with large fleets (but then most commercial sets do).

Grand Fleet Actions in the Age of Sail (A. Butler).  Good set for this period, quite simple so copes well with big battles, but keeps differentiation between the ships.

Damn Battleships Again.  An official DBA derived set by Phil Barker for 1870-1905, available as a free download, giving a surprisingly good game with nice simple mechanisms, but does lose some of the individuality of the ships of the period (which were very individual!)  [Peter Hunt has written some amendments]. 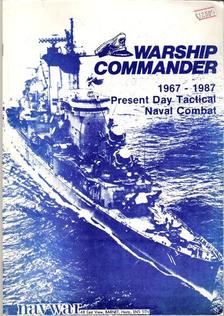 For the modern period Shipwreck has made an occasional appearance, and the board game 7th Fleet also has its adherents.

If anyone out there has managed to actually use Navwar’s insanely complex Warship Commander (nothing to do with the much more recent XXXX Commander series), we’d like to hear from you (so we can send the men in white coats round), although it’s valuable as a reference resource.

Modern Naval warfare is so complex (it really demands hidden movement) it may be one area that does benefit from being played on a computer, Harpoon is a fantastic game, capturing much of the complexity in a manageable form, although I’ve no idea if this is still available, I was playing a DOS version in the late 90s.

And straying (further) into Fantasy, Spartan Games The Uncharted Seas, a good fun game using some lovely (if expensive) models, with the advantage of having a good chance of finishing in an evening, unlike some other sets.  [Free Download]
Non-Commercial:

We also use a lot of home brewed rules, probably more so than commercial sets, covering everything from Galley combat (again a DBA derived set), Anglo-Dutch wars, ACW (using 1/600 models), and various WWI and WWII sets with 1/1200 to 1/3000 scale ships.  Some of these are already available on the Free Rules page (and others will, hopefully, follow).
Powered by